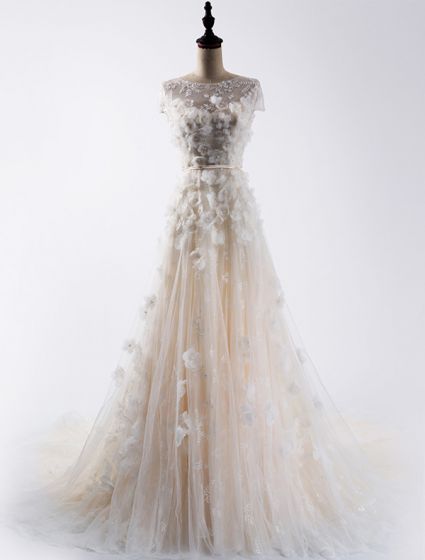 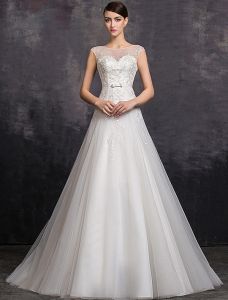 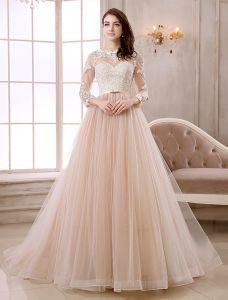 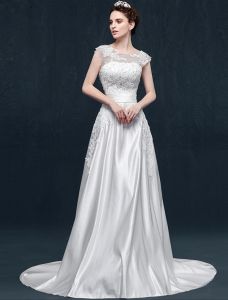 Details
Plus d’information
Avis 5
l
lukerbills Soumis le 6 juil. 2017
Une Ligne Encolure Carrée Manches Courtes Appliques Perles Robe De Mariée En Organza De Champagne
Évaluation
100%
Let me first say, I am not a person who usually writes reviews. In fact, I don't think I've written one in several years. But I felt I HAD to write a review for this product. I was VERY scared to order such an important item online. Due to the price, however, I thought I would take a chance and see what happened -- if it was just awful, I could just resell the thing on eBay or something and go another route. So, I found this dress that I thought looked very pretty and had my mom measure me. Then I put in the order with a note that I did not want a train, and I did not want two inches added to the length for heels since I would be wearing flats. I figured this would all get messed up somewhere along the process and I would have to do some more altering when it showed up, if I even liked the dang thing.
After I submitted the order, the very next morning I got a nice note saying they understood about not adding two inches and they would not do it. The note also mentioned that I just needed to pay $15 to have the train removed. No big deal. I paid the 15 bucks, and I immediately got a note saying thanks for the payment, the train would be removed.
I sort of forgot about it, then I got an email saying my dress had been shipped about a week later. I was shocked that they were able to get it done so quick. I really got scared at that point. A few days later I got home, and there was a small box on the porch. I opened it up, and there was my dress in a see through plastic bag, about the size of a pillow. My immediate reaction was extreme disappointment. It looked cheap, and I could see the seams -- this looked nothing like the dress online! Then I opened the bag and saw that -- stupid me -- they sent it wrong side out, I guess to avoid stains and wrinkling. So the seams and things I saw were the inner construction of the dress.
I turned it right side out and I have to say, I thought the thing looked awesome. It definitely looked WAY more expensive than the price paid. I'm not some fashionista or anything, but I thought it looked more like an 800 dollar dress than a 300 dollar dress. Very elegant and well put together.
I got brave and put it on. I was shocked. Not ONE THING needed to be altered. It fit like a GLOVE. Everything was exactly as it should be. It looked AWESOME. I simply couldn't believe it. I mean, not one alteration was needed.
I'm writing this in case you are skittish like I was about ordering online. These people are timely, good, cheap and deliver on time. I would order anything from these people with no hesitation whatsoever. I can't recommend them enough, especially for brides with "beer budgets and champagne taste." :)
g
gheorghe Soumis le 21 juin 2017
Une Ligne Encolure Carrée Manches Courtes Appliques Perles Robe De Mariée En Organza De Champagne
Évaluation
100%
I receive my dress , is wonderful...the dress is very good,the custom size the same,thank you so much :) :)
W
Winni Soumis le 5 déc. 2016
Une Ligne Encolure Carrée Manches Courtes Appliques Perles Robe De Mariée En Organza De Champagne
Évaluation
100%
Amazing A-line dress!! So elegant! Love it!
H
Helen_Finger Soumis le 17 oct. 2015
Une Ligne Encolure Carrée Manches Courtes Appliques Perles Robe De Mariée En Organza De Champagne
Évaluation
100%
This A-line dress is so elegant. It is convenient to walk around. I also like the beading. Your customer service is so considerable and helpful. I will recommend your site to my friends.
L
Lydia Soumis le 21 sept. 2015
Une Ligne Encolure Carrée Manches Courtes Appliques Perles Robe De Mariée En Organza De Champagne
Évaluation
100%
Thank you very much for the beautiful wedding dress you made for me. It is perfect.
The flower design with the lace on it makes me look elegant and graceful.
Can't be more pleased with it.
Ajoutez votre commentaire
Les gens ont également fouillé
Robe dentelle champagne de Robe longue train robe court robe courte Robe longue dentelle Robe mariée Robe mariée satin Robe mariée or Robe mariée fleurs Robe mariée noire Robe mariée strass robe mariée longue Robe mariée perle Robe mariée 2020 Robe mariée bleue Robe mariée simple Robe mariée marron Robe mariée beige Robe mariée plage Robe mariee ivoire Robe mariée hiver
vertical_align_top